Just because there’s a recycle sign on the bottom of your plastic cup doesn’t mean it’s actually recyclable.

Plastic is tricky because the stamp that identifies the type of plastic looks exactly like the chasing arrows recycle sign.

This sneaky (ahem, greenwashing) has tricked A LOT of people into thinking that all plastic is recyclable and, well, it’s just not.

When it comes to recycling plastic, you need to pay attention to what’s INSIDE the chasing arrows / recycle sign – the number.

The number identifies what type of plastic it is (psst. There are seven types of plastic that you need to know and I’ll go over all of them later in this post ) and from there you can figure out if your city or county accepts it.

To make matters even more complicated, recycling rules vary from city to city and county to county.

Just because the last place you lived accepted plastic #3 doesn’t mean that your new place will.

That’s because recycling is a business! It’s so easy to think of recycling as a charity, but it’s not.

This is one of the reasons it’s so important to purchase products made with recycled materials, because if you’re not… are even really recycling?

I go over this pretty extensively in my blog post Recycling 101 – 5 Easy Things Everyone Needs to Know.

As of January 2018, China the largest global buyer of recycled paper and plastic placed a ban all imports of that have over a 1% contamination rate.

To put that into perspective, the most advanced recycling facilities in the US (the ones with the lowest contamination rates) operate around a 4-5%.

On the other side, some facilities have a 35% contamination rate which is absolutely mindboggling.

Contamination happens when either:

The first is an example of wishcycling.

Which is when you put something in the bin HOPING that it will be recycled even though it won’t be.

And, no, none of them are recyclable.

When you put something in the recycle bin WISHING for it to be recycled, you do more harm than good.

When incorrect materials arrive this can clog the machines, slow down the workers, stop the machines, and create contaminated bales of recyclables that no one will purchase. I.e. result in all of the correct recyclables being landfilled.

Yep. A rogue contaminated recyclable can cause an entire BALE to go to the landfill.

The latter is when something is actually recyclable, but it’s not quite right.

Paper is recyclable, but shredded paper or coffee cups (which are actually lined with plastic!) aren’t.

Cardboard is recyclable, but pizza boxes are not. I could go on and on, but already have a whole series on that called How to Recycle the Right Way!

After reading all that you might be wondering, should I even bother recycling? Yes!

You absolutely should, but now more than ever, we need to make sure we’re recycling properly so our materials can actually be turned into new products.

And, of course, I can’t let you get into the meat of this article without first telling you that the most eco-friendly thing you can do is to recycle LESS!

Recycling should be a last resort and you can read more about it in this post Why You Should Recycle Less.

Plastic #1 is made from polyethylene terephthalate and is commonly known by its street name PET.

This plastic is often clear and most commonly used for beverages like drink cups and soda bottles. ⁠
⁠
It is one of the safer plastics except for when it’s exposed to heat.

Antimony trioxide a flame retardent can easily leach into your beverage. This is why you’ve read numerous articles about not leaving plastic water bottles in the car.
⁠
PET is porous so bacteria can accumulate and breed which is why it’s not recommended to reuse single-use bottles over an extended period of time. ⁠
⁠
The good news about PET is that it’s one of the most valuable plastics!

Plastic #2 is high-density polyethylene and is commonly seen with the abbreviation HDPE.

It’s a thermoplastic which is hard and opaque.

And, out of all the plastics, if I had to choose, it’s probably my favorite.

As far as we know, there are no known health concerns associated with it and it has a pretty robust domestic recycling market.

Plastic #3 is polyvinyl chloride and we commonly see this plastic abbreviated with PVC.

I’m sure you’ve heard of this one because what probably springs to mind are PVC pipes? At least it does for me.

PVC is used to make a number of household items like shower curtains, vinyl, cling wrap, inflatables like pool toys, flooring, car interiors, and a lot of vegan leathers.

This is a thermoplastic polymer, and a lot of plasticizers and phthalates are added to make it softer and more pliable.

Phthalates are endocrine disruptors that can interfere with our body’s natural communication system.

If you’re interested in learning more about the dangers of endocrine disruptors and what all of these synthetic estrogens are doing to our health I can highly recommend the book Estrogeneration How Estrogenics Are Making You Fat, Sick, and Infertile.

It was the first book read in my sustainable living book club, and I would love to invite you to join!

Plastic #3 is not recyclable in most locations.

Plastic #4 is Low-density polyethylene is known by its abbreviation LDPE.

LDPE is most commonly used for grocery bags, plastic wrap on items being shipped and is the water-proof inner lining on things like coffee cups and milk cartons.

It is a thermoplastic made from petroleum, and it can be opaque or translucent.

While there aren’t any known health concerns, this plastic is very difficult to recycle.

There currently aren’t many film recycling facilities, and waste management companies do NOT accept films loose in the curbside bin.

A few will accept them, but they need to be balled together inside of a larger plastic #4 bag and should be the size of a basketball before being placed in the bin.

If you are looking for a place to recycle #4 films, I know a few grocery stores and target do have film recycling drop points at the front of the store.

However, there aren’t many domestic markets so most of these films are so sometimes these are landfilled.

Plastic #5 is Polypropylene most commonly seen with the abbreviation PP.

PP is most commonly used for tubs like yogurt, cheese, and butter, lunchboxes, tupperware, and prescription bottles.

It’s a thermoplastic polymer making it tough, strong and is heat resistant so we often see this plastic as microwaveable and dishwasher safe.

All this means is that the heat from the microwave and dishwasher won’t warp the shape of the plastic.

It doesn’t mean that it’s healthy, and I would personally recommend reheating food on a plate rather than in a plastic container.

If plastic #5 is rigid, some recycling facilities may accept it, but it doesn’t have a very good domestic market so most of the time this material should be landfilled.

Plastic #6 is Polystyrene most commonly seen as PS and it’s my least favorite plastic.

This is a petroleum-based plastic that we most commonly know as Styrofoam, but it’s also used for so many other things like disposable cutlery, coffee cup lids, styrofoam cups and egg cartons, dvd cases, takeout trays, and packing peanuts.

I have a particular beef with styrofoam because it so easily breaks into tiny pieces that pollute our waterways as well as the fact that it contains toxic substances like styrene and benzene which are hazardous to human health as suspected carcinogens and neurotoxins according to the EPA and the International Agency for Research on Cancer (IARC).

Most of these plastics are pretty easy to avoid when it comes to food so be sure to check out my ultimate guide to zero waste swaps from A-Z so you can learn how to easily avoid this plastic!

While there are one or two special programs that accept this material as a general guideline this is not accepted at recycling facilities.

Plastic #7 is a little tricky because it can be a mixture of all sorts of plastics.

It’s an “other” but sometimes you’ll see it with the initials like PC which stands for polycarbonate.

But, bioplastics are also a number seven and you might see the initials PLA and some of these can be composted in your backyard others can only be composted in an industrial facility that’s heated up to a certain degree.

But, no matter which letters you see a plastic #7 sign almost always means it’s going to the landfill.

I hope that you’ve found this blog post helpful if you did please share this with your friends and family.

Recycling should be a last resort. It’s very important that we first reduce and reuse before we ever get to recycling.

So, if you’re looking for more tips on how to reduce the waste that you produce you can get my guide How to Cut Your Waste by 80% with three small changes.

But, if you’re just looking for more recycling tips you should check out my series How To Recycle the Right Way! 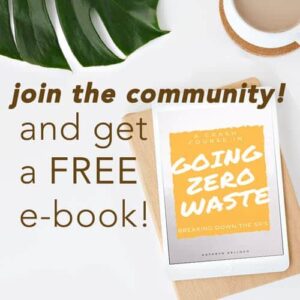 It’s#GoodNewsFriday and the LAST SLIDE IS MY FAV

Plastic in the environment isn't super great, but

The biggest mistake I made when moving to an eco l