This post was sponsored by Tom’s of Maine. All thoughts and opinions are my own. Please see my full disclosure for more information.

We recently talked about what I still buy in packaging. But I thought it would be an interesting perspective to see what Justin buys in packaging.

Justin does not claim to be zero waste but he lives with someone who is. This is also an experiment to see how much I’ve rubbed off on him in the last year.

I want to preface this by saying: I do not expect him to change. I’ve never asked him to do anything differently. Well, sometimes I ask but my feelings aren’t hurt if he says no.

I always wonder what if the shoe were on the other foot? What if Justin all the sudden hated vinegar. Refused to have any vinegar in the house. No more buffalo sauce. How would I take it? Probably not very well.

Life is about compromise.

I think ice cream is Justin’s buffalo sauce. His life would not be complete without it. I don’t really understand. Besides not being able to eat dairy – it’s cold.

I don’t like anything that’s cold. He sent me to the store once to buy ice cream for him, which I will do on occasion. I brought back gelato that comes in recyclable tubs.

He knew I bought it because of it’s plastic #1 status. And he proceeded to inform me that gelato and ice cream are not the same thing. Woah. What!? It’s frozen sugar milk. It isn’t all the same?

Apparently not. Oh well. Now he does most of the ice cream shopping. I only want to make sure it’s from as happy of a cow as he can find. So, we’ve compromised.

I’m pretty grateful his favorite chip is the only chip that comes in recyclable packaging. It can’t really get better than that! He doesn’t buy them often, because I serve tortilla chips that fulfill the chip craving at lunch.

But, occasionally – he’s having a bad day and just wants potato chips.

Tom’s of Maine Toothpaste and Deodorant

Justin does not like toothpowder. I’m working on a paste, but he probably won’t like that either. And, that’s A-Ok. It’s not for him. I feel like I’ve taken him far into the rabbit hole of natural living.

He also doesn’t want to use my homemade deodorant. Which is perfectly fine by me; I’d just prefer that there isn’t any aluminum or crazy chemicals in the deodorant he wants to use.

And, I’m in luck because he likes Tom’s of Maine. I think he’s partial because he’s from Maine…. but I think they’re getting it right as a company.

Their products are free of artificial flavors, fragrances, and preservatives. There’s no animal testing, and they work with TerraCycle to recycle all of their packaging. It’s not a perfect system, but it’s pretty damn close to zero waste.

I also think they work! Which is always important.

Even though Justin and I aren’t completely on the same page. We still have very similar values. We want to be good stewards to the environment and care about the potentially harmful chemicals that come into our beauty products.

I’ve had a post about our compromises in the works for quite a while.

And, I have another one coming up about making a lifestyle changes when your family isn’t as excited about them as you. Tom’s of Maine contacted me about sharing about their deodorant.

This was developed in a partnership with them, and all opinions are mine. Since, Justin uses it, I decided it was time for this post. I really do respect them as a company. And, I think they’re our perfect compromise.

They’re also a great option for anyone who’s not ready to make the switch to homemade!

If you’re not in a position to switch to homemade, you don’t have time or the energy – I think you should check them out.

And, look at their partner TerraCycle. It can be easy to feel defeated when all you see are picture perfect trash jars. It can feel difficult to achieve that level of perfection. But, it’s not about perfection; it’s about making better choices.

This is not an exclusive club. It’s not all or nothing.

So, don’t feel discouraged. Do the best you can. Buy the toothpaste, the deodorant, an occasional pint of ice cream.

Just be mindful. Be conscious. Save it for special occasions. Don’t buy it, just to buy it.

Until we live in a circular economy, we will never be perfect. It’s all about compromise.

Is your family supportive of your lifestyle change? Have you seen them make any changes? 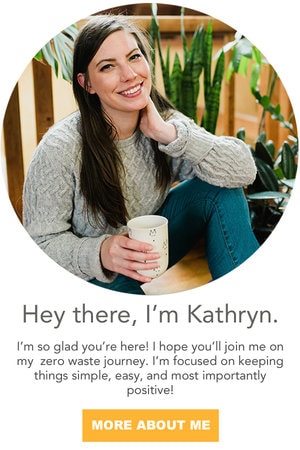